Posted at 21:17h in Case Studies, Post-tensioning by BBR Contech 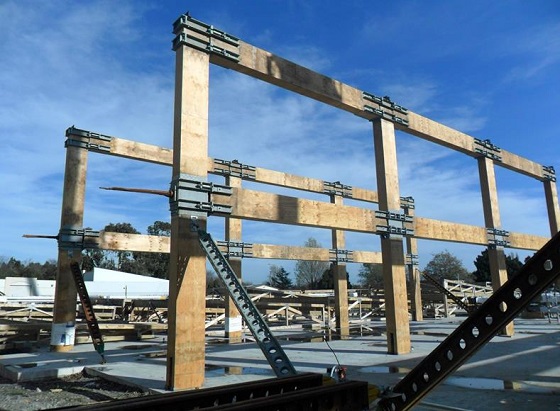 While Trimble Navigation’s Christchurch office survived the 2010 and 2011 earthquakes, it wasn’t destined to last for long: in 2011 the entire building was destroyed by fire.

Replacing it will be the first building in New Zealand constructed with post-tensioned LVL frames and post-tensioned LVL walls. Standing two storeys high, it will also include clever devices that reduce earthquake damage by dissipating the energy and controlling movement in the structure itself; and beam column joints with forced rocking points, which control joint movement and damage. The energy dissipaters can be easily replaced after an earthquake, providing economical repair alternatives.

BBR Contech’s role is to post-tension the building’s nine LVL shear walls and 19 horizontal LVL beams. That means: installing 54 Macalloy 50mm-diameter bar tendons vertically through the walls, and connecting them to screwpiles that terminate in the gravel layer installing six multi-strand, 15.2mm tendons in each beam. The tendons are greased and sheathed to protect against corrosion, and the ends are wrapped in Denso Tape  and capped to provide an additional barrier against the elements.

In another innovation, the building’s strength will be constantly monitored, with tendons easily removed and replaced if necessary. The project, and its impressive commitment to earthquake resistance, is already earning accolades: it won a ‘highly commended’ award in the 2012 Timber Design Awards.