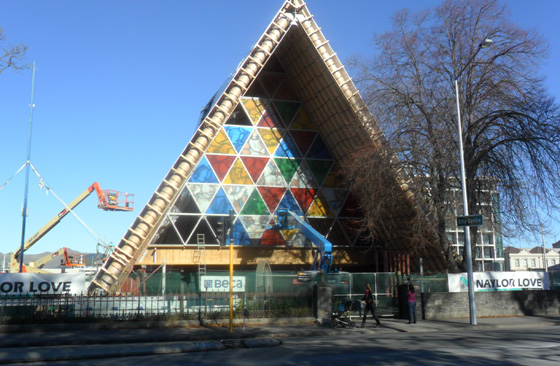 You won’t find many new cathedrals built for just $5 million these days, but in Christchurch they’ve done just that – and earned widespread acclaim to boot.

The new ‘Christchurch Transitional Cathedral’ (known as the Cardboard Cathedral) was commissioned after the devastating 2011 earthquakes that left the iconic Christchurch Cathedral severely damaged. The man behind the design was Shigeru Ban, a Japanese architect who’s most well known for his innovative work with paper.

Ban’s influence is clear in the new structure: mounted on a foundation of shipping containers, its walls and ceiling feature 320 cardboard tubes, each 600mm in diameter and 20m long. The tubes are protected by a polycarbonate roof and held in place with LVL (laminated veneer lumber) beams, which have been mounted on a structural steel frame. It’s this last element that bears the mark of BBR Contech, because the braces for the frame are Macalloy 56mm-diameter tendons, complete with a fork, pin and locking cover at each end.

The Cathedral officially opened in August. Capable of seating 700 it’s not, as its name might imply, a temporary structure. With a design life of at least 50 years, it will become a key feature of Christchurch’s new architectural landscape, welcoming the community for church services, concerts, exhibitions and other public events.