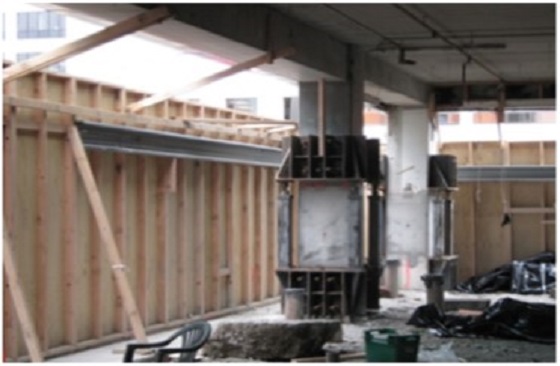 This 3 storey building was experiencing differential settlement and had settled further in one corner.

A decision to re level the building was made and a scheme developed where the ground floor columns would be lengthened with the storeys above lifted with hydraulic jacks.

BBR Contech was employed as a Nominated Subcontractor to support the building while the columns were being removed by hydrodemolition, jack the building to agreed levels and then reinstate the columns at the new adjusted lengths.

BBR Contech managed the design, manufacture and installation of the steel temporary support structure from which the building would be jacked and supported until the columns could be reinstated. BBR Contech also managed the column hydrodemolition so that the concrete could be removed without damaging the existing reinforcing.

The hydrodemolition exposed laps in the longitudinal steel reinforcing of the existing columns and once these were exposed it was possible to raise the upper levels of the building independent of the foundations.

The specification required that all 5 columns be adjusted in unison and this required the use of 5 pairs of hydraulic jacks with capacities between 250 and 500 tonne.

Jacking and reinstatement was successfully completed while the building remained occupied by the existing tenants.