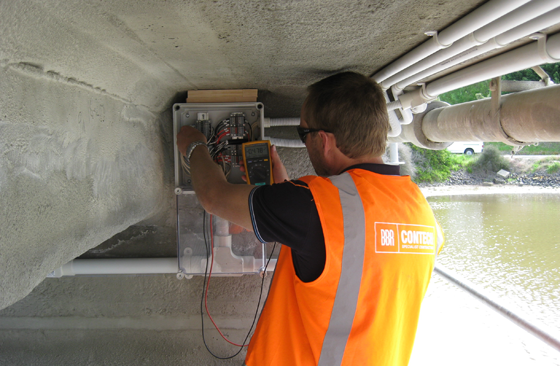 BBR Contech has recently installed a self-monitoring cathodic protection system on Dunedin’s Kaikoura Estuary Bridge – an important commuter link between the city and the coastal community of Brighton.

BBR Contech recommended that Dunedin City Council use the system as an effective way to address significant deterioration in the bridge’s reinforced concrete, particularly in the pier heads, longitudinal beams and deck soffit. Using a low-voltage electrical current (too weak to be sensed by human touch), it attracts corrosion-causing chloride particles away from the reinforcing steel and on to sacrificial strips of zinc, which will corrode instead.

The project was completed ahead of deadline and under budget – two factors that, combined with effective traffic control and our efforts to protect the estuary’s wetlands ecosystem, earned BBR Contech some very positive feedback. The Council has also indicated that it’s likely to use the system on other bridges in the region in future.

It’s a solution that makes good economic sense. Given that it’s expected to extend the bridge’s life by 25 years, for a cost of about $760,000, it’s a much more attractive alternative to the estimated $2.5 million to replace it altogether!