Posted at 01:53h in Case Studies, FRP by BBR Contech 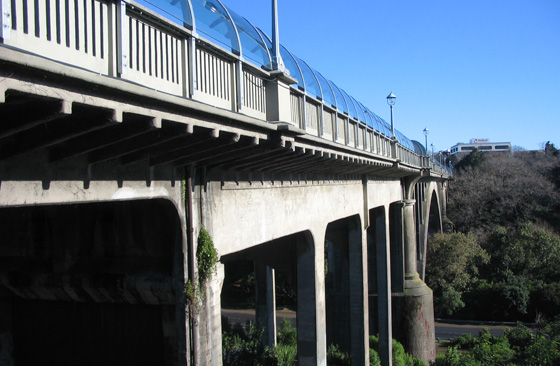 Boasting the world’s largest single span of reinforced concrete,GraftonBridgewas at the forefront of construction technology when it was completed in 1910.

Dramatically located 43 metres above Grafton Gully inAuckland, the 296-metre-long bridge has attracted international acclaim as an engineering structure of unique value. It’s also earned distinctive recognition inNew Zealand– with the inaugural NZ Concrete Society Enduring Concrete Award in 2008, and its registration as a Category I structure by the New Zealand Historic Places Trust owing to its outstanding technological merit and magnificence as a townscape element.

Almost 100 years after it was built, the bridge has recently been strengthened as part of the ‘Auckland Central Connector’ project, for Auckland City Council. This has provided it with essential seismic resistance (enabling it to withstand a one-in-1000-year earthquake) as well as the capacity to carry increased bus traffic and cope with future transport innovations such as light rail – all without altering the bridge’s appearance or changing its heritage status.