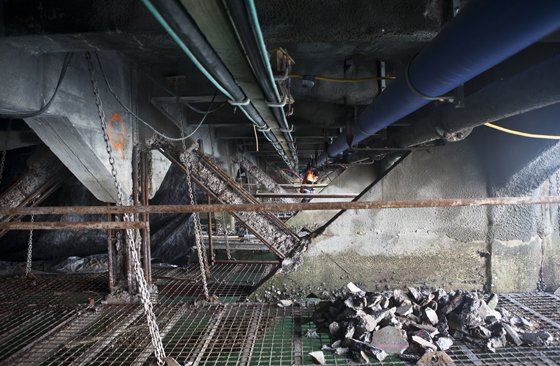 Built of reinforced concrete and completed in 1913, Queens Wharf is an important part of Auckland’s social, industrial and engineering heritage. It is the second oldest wharf structure left on the waterfront – and originally developed as a key hub for New Zealand’s burgeoning import and export industries. The upgrade was required for the 2011 Rugby World Cup.

One hundred years after it was built, the wharf was naturally exhibiting signs of deterioration. BBR Contech’s job was to make it structurally sound by removing and reinstating 185 cubic metres of concrete and replacing much of the reinforcing bar – essentially two-thirds of the wharf’s substructure. The defective concrete was removed using ‘hydro-demolition’, applying high-pressure water to deliver an excellent bonding surface for repairs while minimising noise in the inner-city environment. Repairs were carried out using the dry spray gunite.

The work was completed four weeks ahead of schedule, the team having overcome all the challenges of working with the tides, managing the risks of operating in such a public location, dovetailing the work schedule with other projects happening on the wharf, and ensuring all the debris was disposed of responsibly.

The client was delighted with the results. “What impressed me most was the consistency with which BBR Contech performed,” says Mark Fraser, Project Leader Queens Wharf for Waterfront Auckland. ”The team delivered exactly as they said they would, but ahead of time and with a larger scope than we originally set out to achieve, all the while working around and with two other contractors on site. Delivering possibly the highest-volume repair project in New Zealand and in such a short timeframe made for a very impressive performance.”